Learn About Scholarships and Funding 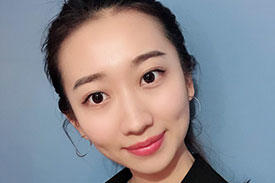 Meet Mengxia “Iris” Zhou, who was awarded the Andy Bursten Memorial Scholarship in 2020.

The Andy Bursten Memorial Scholarship is an award in the amount of $1,000.

Generously donated by William Reeder, Interim Director, and Richard Kamenitzer, Director Emeritus, it is awarded to an outstanding current Arts Management student who exemplifies Andy's same spirit of kindness, generosity, respect, and passion for financial management and budgeting for the arts.

This Award is offered on a rotating basis in the spring semester. Applications are reviewed and awardee is selected by the Arts Management Faculty Admissions & Scholarship Committee.

Andy Bursten served as the Director of Finance and Administration and CFO of the College of Visual and Performing Arts and was a member of the Arts Management faculty until his retirement in May of 2017. For over eight years Andy taught the core financial management course, AMGT 704 Finance and Budgeting for the Arts I. Andy passed away suddenly on August 2nd, 2017 in his beloved Las Vegas, NV.

Andy worked for over 30 years in nonprofit financial management. Before joining George Mason University, his professional experience included: Controller, Washington National Opera (formerly the Washington Opera); Director of Finance and Administration, Washington Performing Arts Society; Chief Financial Officer, Levine School of Music; Controller, Special Olympics International; Accounting Manager, National Symphony Orchestra/Kennedy Center. He was also an accountant for St. Jude’s Ranch for Children and Temple Beth Sholom. He was a member of the Institute of Management Accountants, serving as an officer for the chapters in which he lived, treasurer of the Arts Council of Fairfax County and Vice President for Finance of Congregation Beth Emeth in Herndon VA.

Andy was an accomplished viola player and played in several orchestras including the Reston VA Community Orchestra, McLean VA Symphony Orchestra and the Henderson NV Civic Symphony. He received his BA from Grinnell College and his MBA from American University.

Anika Kwinana is an emerging arts and events leader, with a passion for the role that the arts can play in socio-economic development. She graduated with an MA in Arts Management from George Mason University in Spring 2018, with a final project focused on diversity in the arts workforce.

Having lived in South Africa for more than a decade, she used her master’s degree in public anthropology to inform her work as a manager, facilitator and proposal developer for community-based youth, HIV-AIDS, and women’s empowerment programs. She also spent six of those years as full-time director of a music & arts department, leading more than 100 diverse volunteers, performing on a weekly basis for a congregation of more than 2,000 members. She produced, wrote for and performed on two live CD-DVD projects, selling more than 10,000 units.

While returning to the U.S. in Summer 2014 had its challenges, Anika continued to work in the arts, holding down three part-time jobs: selling performance subscriptions; house managing at a local performing arts center; and, producing a show for a growing theatre company.

In 2015 she began working full-time for an educational association, first as an administrative assistant, but was promoted within six weeks to event manager, and one year later, promoted to assistant director, currently managing STEAM-related college and career fairs in seven cities across the country. Her work entails concept development, program design, and partnership-building, but she finds connecting with students and families to be the most rewarding part of her work. She is a member of the American Society of Association Executives.

Anika believes that all of these experiences will add-value to her long-term goal of developing arts organizations, focusing on community development and creative economies.

She and her wife raise two daughters.